The Spinning Wheel Club was a small “intimate” venue at the rear of the Bull & Dolphin on lower Bridge Street that ran disco nights that specialized in rare soul and ska, building a virtual Northern Soul scene well before that genre took off up north.

The club opened on 19th April 1968 and was run by Dave Bennett and his local “Disco-Sound” organization which also ran weekly disco nights at The Bell in Deeping St James as well as travelling around the area with what was one of the first ever mobile roadshows.

Live music took off at the Bull & Dolphin in April 1969 when Desmond Decker was lured to the Spinning Wheel Club for the princely sum of £90 which turned out to be a bargain as his single “Israelites” raced to number one in the UK charts on the week of his appearance leading to a huge turnout several hundred more than the small c.200 capacity venue could hold !

Decker was supported by UK progressive rock band “If” who went down so well that the club organisers decider to bring in a string of “blues” rock bands on Friday nights thereafter which included The Strawbs and even Black Sabbath in March 1970. 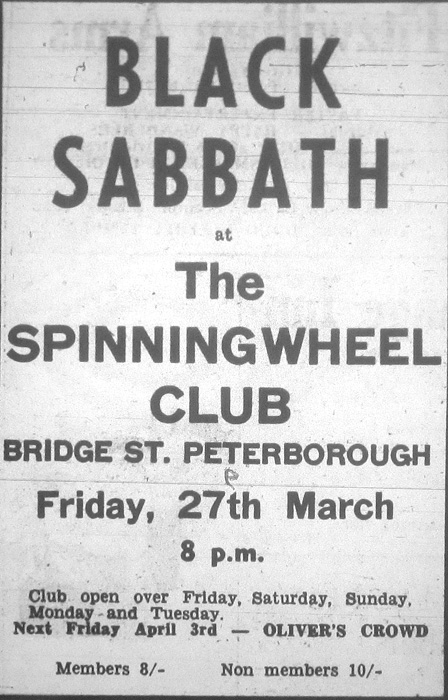 Unfortunately, crowds for the Friday night “blues club” dwindled during 1970 and when only 40-50 turned up to see The Strawbs in May, Bennett decided enough was enough and replaced the live gigs with yet another disco night.

In mid June 1970, the Spinning Wheel Club announced that it had closed down.