Biography (thanks to www.garagehangover.com for most of this information)

In 1963, former Electrons lead singer Mike Tinsley, guitarists John Stewart and Tony Cockayne; bass player Ray Honeyball and drummer Leslie Dash are all Royal Air Force ground crew based at RAF Wittering in Cambridgeshire, England. Captivated by the beat scene exploding in the UK, they decide to form a band, The Trendsetters. The quintet performs initially in the officers’ mess at RAF Wittering but then ventures out, debuting at the White Lion pub in Whittlesey, Cambridgeshire. After receiving a positive reception, they play at the Dorothy Ballroom and the Corn Exchange in Cambridge.

In 1964 the band changed its name to The Hedgehoppers; a nickname for the “V” bombers, which can fly a few hundred feet above the ground, under enemy radar to avoid detection and ground-to-air missiles. A local agent spots The Hedgehoppers playing the local pub scene and arranges live gigs to showcase the band at weekends. By June, The Hedgehoppers have opened for Unit Four Plus Two, The Hollies and The Kinks among others.

In 1965 the band continued to gig locally. Whittlesey born Alan Laud, who was a civilian living near the RAF base, takes over from Cockayne on rhythm guitar after meeting the musicians in a local pub.

In August, The Hedgehoppers are playing at the Corn Exchange in Cambridge when they are spotted by Trinity College student Kenneth King (aka Jonathan King), who is working as a producer for Decca Records through his own company “Jonathan King Enterprises”. The aspiring producer is about to release the single “Everyone’s Gone To The Moon” under his recording name Jonathan King and approaches The Hedgehoppers to see if they will record another of his songs – “It’s Good News Week”. King, who is keener on becoming a producer than a singer, suggests that they add the “Anonymous” tag so that they can keep their fan base but protect their anonymity from the RAF, which is unaware of the recording.

The band records “It’s Good News Week” under the musical direction of Arthur Greenslade, who adds session players, including guitarist “Big” Jim Sullivan, to back Tinsley on the track.

September King’s tongue-in-cheek protest song, “It’s Good News Week” backed by “Afraid of Love” is released. The single’s success generates a huge amount of publicity but also creates problems with the RAF, which has not given the musicians the proper authority to find employment outside the Armed Forces. Hedgehoppers Anonymous make their debut TV appearance on ITV’s Ready Steady Go! They also appear on BBC TV’s Top of The Pops to plug the single.

In October, Tinsley successfully submits an application to the RAF for a discharge.
NME reports that Dash, Honeyball and Stewart have applied to the RAF for a discharge but it is not known whether these will be accepted. Behind the scenes, London session musician Glenn Martin, who is the resident drummer at the Ad-Lib club and has been playing with Ayshea Brough, takes over from Leslie Dash for live gigs while the drummer tries to gain a discharge.

With Martin onboard, the new line up plays at Parr Hall, Warrington, Cheshire. On the same day, NME reports that the future of Hedgehoppers Anonymous is still in the balance as it is uncertain whether Dash, Honeyball and Stewart’s applications will be accepted. Soon after, Stewart successfully gains a release from the RAF. Meanwhile, the group is forced to turn down an offer to join the Gene Pitney tour because of the travelling involved.

In November, NME reports that Dash and Honeyball are likely to be temporarily replaced because their applications to buy themselves out of the RAF have been turned down a second time. The magazine goes on to say that Dash and Honeyball will return to RAF Wittering today and their availability for appearances – as close as next week – is still uncertain. The band’s agent Chris Peers tells NME that the two musicians will work on as many dates as possible, but for some bookings replacements will have to be brought in. Behind the scenes, however, Dash decides not to continue with the band and will later move out to South Africa where he currently resides. Glenn Martin takes over but will not be officially announced as Dash’s replacement until December.

In December, Decca rush releases a second single to capitalise on the success of “It’s Good News Week” but the Kenneth King written “Don’t Push Me” c/w “Please Don’t Hurt Your Heart for Me” sells poorly. Like Dash, Ray Honeyball cannot get a release from the RAF. Former Von Dykes bass player Lee Jackson is brought in and put on a retainer. The idea is that he will fill in for Honeyball whenever the bass player cannot honour an engagement. While on a retainer, Jackson plays some shows with John Mayall’s Bluesbreakers.

NME announces that Keith Jackson and Glenn Martin have formally replaced Ray Honeyball and Leslie Dash who have been unable to obtain discharges from the RAF.
Record Mirror announces the new line up, introducing Lee Jackson. However, Jackson only appears in a few publicity photos before finding work elsewhere. He subsequently joins Gary Farr & The T-Bones and then The Nice. Londoner Tom Fox takes over on bass from The Beat Boys and Barry Edwards and The Semi-Tones.

In January 1966, having signed up to Chris Peers Promotions the previous year, the new line up starts to pick up steady work around the country.

In April, Martin suggests that Hedgehoppers Anonymous cut a version of Chip Taylor’s “Wild Thing”, which is recorded and prepared for release. However, according to Martin, Kenneth King is not convinced about the song’s merit and persuades the musicians to record “Baby (You’re My Everything)” (a Little Jerry Williams ballad that Jonathan King had the rights to) instead. Shortly afterwards, The Troggs top the charts with their own version of “Wild Thing”, allegedly after hearing Hedgehoppers Anonymous’ unreleased version. However, Jonathan King relates “the demo of Wild Thing was first played to me by the publishers; I loved the song and allowed the guys to play on it but their version wasn’t even as good as the demo so I passed and the song was given to Larry Page who produced it with the Troggs.”

In May, having appeared on ITV’s Ready Steady Go!, Hedgehoppers Anonymous return with a third single, “Baby (You’re My Everything)” c/w “Remember”. The band’s poppy sound, however, increasingly sounds dated, and the single does not chart.

In June, Hedgehoppers Anonymous play at the California Ballroom, Dunstable with The Felders. Melody Maker reports that Mick Tinsley has been ordered to rest for a week after being injured by fans at the Star Rink Ballroom, West Hartlepool last weekend. The band appears on BBC Radio’s Saturday Club this weekend.

In August, the band moves towards a more harder-edge rock sound, which culminates in the mod/freakbeat classic “Daytime” which is backed by “That’s The Time”. Unfortunately, the single is not a chart success. “Daytime” is an adaption of Les 5 Gentlemen’s “Dis-Nous Dylan” (originally co-written by Jean Fredenucci of Les 5 Gentlemen and T. Saunders) with English lyrics by John Stewart. Les 5 Gentlemen also record “Daytime” with Stewart’s lyrics for a release on the Major Minor label as Darwin’s Theory.

In September, Hedgehoppers Anonymous record for BBC Radio’s Saturday Club with Dave Dee, Dozy, Beaky, Mick and Tich, The Fortunes and Glen Dale and in October the band plays at the Lyceum Ballroom in London on a bill that includes Tom Jones.

In early 1967, NME reports that the current Hedgehoppers Anonymous will split up on 11 February but that Martin and Fox are planning to form a new group, which will probably use the same name. On the same day, Mike Tinsley releases his debut solo single, “Let It Be Me”, produced by Kenneth King, on Decca. The publication also announces that Alan Laud and John Stewart will be forming a trio with ex-Overlanders’ member Terry Widlake but the collaboration never happens.

Rather than keep the Hedgehoppers Anonymous name going, Glenn Martin and Tom Fox get a job with blues singer Kenny Barnard, who is opening at the Bag O’Nails club after resident band The Peddlers have moved on.

In March however, Martin revives The Hedgehoppers Anonymous name and brings in lead guitarist Ian Atkinson from The Morton Fraser Harmonica Gang. Atkinson recommends his friend from Leeds, bass player Howard Livett. Keyboard player Vincent Crane joins for a few gigs but soon leaves to form The Crazy World of Arthur Brown. Atkinson contacts his friend organist/singer Chris Lazenby, who has previously worked with the guitarist in Bradford band, The Del Rio 4. They also recruit a second lead guitar player from Oldham.

In April, the new line up embarks on a busy schedule of nation-wide gigs that takes in venues as far flung as Glasgow and Leicester. In September, Lazenby and the second lead guitarist depart when Martin convinces original singer Mick Tinsley to return to front the band.

In November 1967, after returning from a Scandinavian tour, Tinsley resumes a solo career. He later becomes a co-writer for songs covered by Joe Dolan and Kelly Marie. In the late 1960s/early 1970s, Livett works on the Mecca scene with the band Huckleberry and spends over 10 years playing the Leeds City Varieties but passes away in August 2005. Martin joins Sandie Shaw’s backing group, The Streamliners, featuring Stoke-on-Trent musicians Tony Kaye (guitar), Dave Birkenhead (organ) and John Askey (bass). While with Sandie Shaw & The Streamliners, Martin will appear at the MIDEM Festival in Cannes in January 1968.

When Martin leaves The Streamliners in February, Tony Kaye decides to use the Hedgehoppers Anonymous name for a new, completely unrelated, band, which with a modified line up will continue into the early 1970s, recording in South Africa as Hedgehoppers. 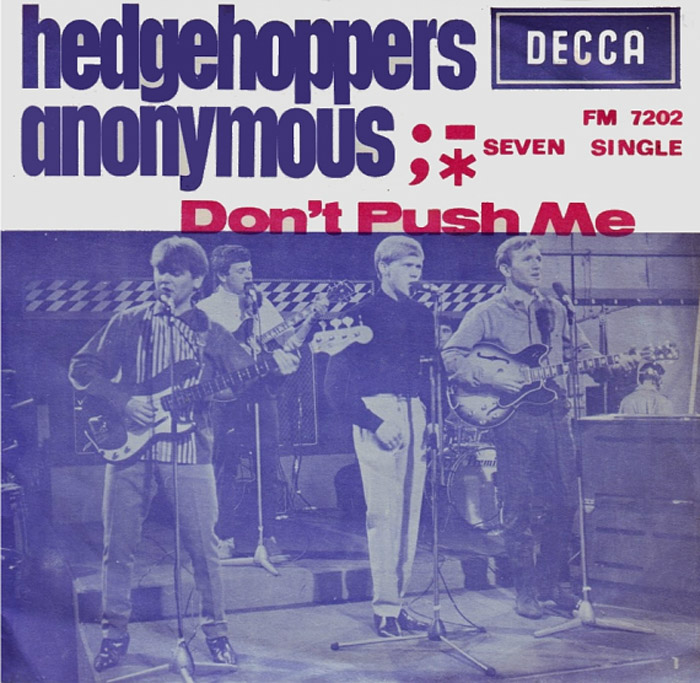