The Corn Exchange made its musical debut in early February 1954 after Wisbech based promoter, Norman Jacobs, secured a ten year lease from building owners Norwich Union to run an entertainment venue. Initially, the Corn Exchange went head-to-head with the city’s established “big band” venue, the Mansfield “Peterborough” Palais on Fitzwilliam Street but as music tastes changed, the venue established itself as the top spot, hosting a number of top bands in the early 1960s including The Rolling Stones in September 1963.

The 600 capacity venue looked doomed to end its life as the city’s premier music venue as early as August 1961 when owners Norwich Union Insurance were granted initial planning permission to convert the building into a six-storey office block.

Promoter Norman Jacobs, battled hard to save the Corn Exchange as a dance hall but was finally defeated on 18th November 1963 when his appeal was finally turned down rendering the building free to be demolished once Jacob’s ten year lease expired on 9th January 1964.

Immediately after the hearing, Jacobs defiantly announced that Peterborough would have a bigger and better dance hall very soon which was to turn out to be the Peterborough Palais on Wentworth Street. The new venue was rushed into an early opening on 29th September 1964 leaving the city without a top music venue for a mere four months.

The final live show at the Corn Exchange was on Saturday 23rd May 1964 which featured four bands including The Ivy League and a little known Northampton band called Hurricane Henry & The Shriekers which was fronted by Ian Hunter who was to rise to stardom as vocalist with Mott The Hoople. 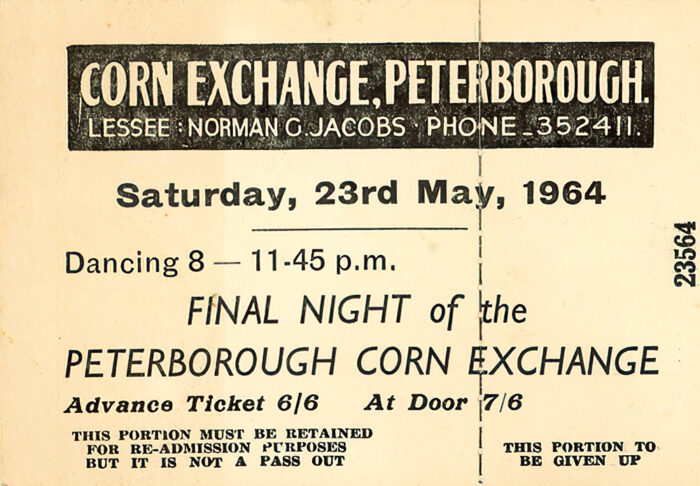 After closure and demolition in July 1964, the site went on to become, amongst others, the main Peterborough Post Office until it was also demolished in 2009. Today, the Corn Exchange would have been on the open space next to St Johns Church on Church Street.